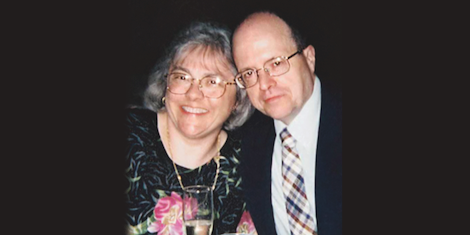 Idamae and Lionel "Dale" Gower have been passionate supporters of the Coast Guard for decades. So when they learned about the Coast Guard Foundation, there was "no question" about including it in their will.

"The Coast Guard is the forgotten service," said Dale, who served from 1973 to 1977. "They do a lot of things that are vital to our country," such as stopping drug smugglers and keeping America's waterways safe to travel. "And there's all the search and rescue they do," he added. "You can't put a price on a life."

"We wanted to help where our money would do the most good," explained Idamae, who was delighted to learn about the Foundation's education, relief and support programs for Coast Guard members. "We did a little checking and thought, 'This is fantastic. We want to be part of this.'"

Dale served as an electronics technician in the Coast Guard. He installed radars and was one of only a handful of members trained in cryptanalysis, or deciphering codes. After training, he was assigned to the ice-breaker, the USCG Polar Star. He was a "plank owner," a member of the original crew that took the boat on its initial "shake-down" cruise to test for any problems.

The Polar Star was the first in a new class of boats with an innovative system that made it more effective at breaking through the 6- to 10-foot ice common in the frigid Alaskan seas.

This had become an increasingly important role for the Coast Guard because U.S. petroleum companies were opening Alaskan oil fields due to the Middle East oil embargo and were shipping massive loads of equipment.

"We needed to break channels in the ice so oil fields could be resupplied," explained Dale. "I saw whole buildings being moved on barge."

After his discharge, Dale worked as a surgical intensive care nurse at the Veterans Administration Hospital for nearly 25 years.

Upon his retirement, he and Idamae started thinking about what they could do to help support the Coast Guard. Once they discovered the Coast Guard Foundation, everything fell into place.

"It's been an honor to work with the Gowers and help their vision become a reality," Brad Sisley, Senior Director of Development at the Foundation. "Their outstanding generosity will improve the lives of Coast Guard members and their families for many years to come."