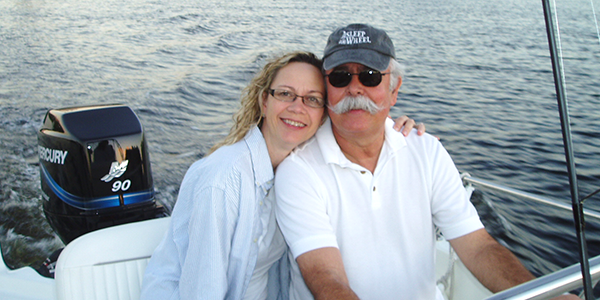 For Tom Paligraf, supporting the Coast Guard Foundation does much more than simply provide essential services to Coast Guard members and their families. He served for 4½ years in the Coast Guard as a young man - an experience that strongly influenced his life - and contributing to the Foundation is his way of "giving back."

"I got more out of the Coast Guard than I ever put in," said Paligraf, who enlisted in 1968 at the height of the Cold War. "It was such a good experience for me. I was a screw-up after high school. I wasn't in trouble, but I wasn't very motivated. It was a time for me to mature and see how the world worked."

After completing training, he was sent to Air Station Miami. "We'd fly patrols, watching for freighters coming in and out of Cuba. We'd swoop down low to check the cargo on deck and take pictures to send back to base."

He also flew on countless rescue missions. One day, his team was searching for an overdue boat when they spotted a man floating on an inner tube in the middle of the ocean. There were no rescue swimmers back then, so it was up to Paligraf, as crewman on the helicopter, to let the rescue basket down while also guiding the pilot to get as close as possible to the target.

"It was a challenge because the rotor wash blew the inner tube around. We finally hoisted him up and got him in the cabin. He was pointing at the inner tube. There was something he wanted. He spoke no English. I spoke no Spanish. I told the pilot, 'I think I can grab it.' The helicopter was amphibious and we set it down on the water. After a few tries with a boat hook, I was able to snag the inner tube. What he wanted was some papers and pictures tied up in plastic."

Paligraf later learned that the man was a Cuban refugee who had been at sea for three days. Had he not been spotted by the Coast Guard, he could easily have been swept further out to sea.

Paligraf's experiences in the Coast Guard made a lasting impact on him. "You take a lot of pride in your work," he said. "When you leave that environment, you have confidence that you can do whatever you set out to do." After his discharge, the tuition assistance he received as part of his veterans' benefits helped him earn an MBA in finance. He enjoyed a successful career as a community banker in Miami before retiring 10 years ago.

"I feel like I owe something back to the Coast Guard," said Paligraf. "They were very influential. Between giving me a little time to grow up and paying for my education, they've meant a lot to me. The Coast Guard Foundation is my way to give back to the country and show my thanks and appreciation."